The FT reports that Barclays have announced the appointment of Hector Sants to their executive board as  a measure to ward off evil from bureaucrats; 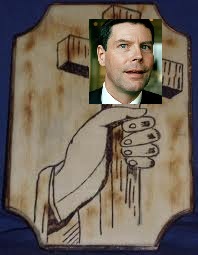 “The package will make the former chief executive of the Financial Services Authority, who is set to become Barclays’ head of compliance and government relations at the end of January, one of the 10 best-paid executives at the UK lender.”

I applaud Barclays on having the honesty to put ‘government relations’ in Hector’s job title! Much more brazen than the sort of shady nomination that Tony Blair got as a “senior advisor” at JPMorgan. Barclays are going out and calling a spade a spade.

More interestingly Hector has a pay package to the tune of up to £3m including LTIP bonuses. Bizarrely Barclays make the following statement;

“Barclays would not comment on the figures, but pointed out that executives’ LTIPs had paid out at only 37 per cent of the maximum over the past five years.”

This does try to diffuse the pay debate  but it rather insinuates that present management are incompetent at meeting their goals?
Posted by Phototropic at 09:30 1 comments

If ever proof were needed that financial journalists are biased, stupid or both the Telegraph has a wonderful confirmation out today.

"Apple's share price has dropped below the $500 threshold for the first time since February, fuelled by fears that the world’s biggest company is starting to lose its shine."

This sounds bad - perhaps a clear technical support has been broken? The stock falling is fuelled by fears! ooooh! But wait the facts lie below;


"Analysts warned Apple could be losing momentum as it briefly slipped as low as $497 in pre-market trading. It returned to $508.92 before the markets opened and closed at $518.83."

In what way is this article not misleading? The stock closed up 1,77% and traded in illiquid premarket at $497. I love how journalists are always the last to the party on these stories right behind my favourite lagging indicator; the sell side analyst (of which she quotes plenty).

It is pretty obvious that any darling momentum stock that consistently beats earnings will one day dissapoint. But never fear because Katherine Rushton is there to stick the knife in a twist the actual facts to support her bearish conclusion. Misrepresenting opinion for fact. Who would have thought it?
Posted by Phototropic at 10:52 0 comments

FT Alphaville has a good comment today indicating the great perils awaiting China with its broken social model. Most noteworthy to my mind is the newspeak which creeps out of the government to soothe the media and analysts with popular buzzwords;

"China’s central bank has called its monetary policy “prudent” since late 2010 even as it has swung back and forth from extremely loose to relatively tight and back to relatively loose again.

Fiscal policy has been “proactive” since late 2008, when Beijing unveiled a Rmb4tn stimulus package in reaction to the global financial crisis but no economists expect the government to launch anything near that kind of response in the foreseeable future."

It sounds like the allusions are all getting a bit stale. Perhaps they need a crack consulting team from the Daily Mail to help them up the hyperbole in their statements.
Posted by Phototropic at 15:14 0 comments